I’m a little late to the party on this, as I’ve seen a bunch of 11-things posts recently, but Morgan, in the midst of her triumphant comeback from a stress fracture, has tagged me to unleash some randomness, so here goes:
Morgan's Questions for the Tagged:
What is the last thing you took a picture of? (I'm keeping this one, could be interesting.) This crazy dragon/knight lego display outside the lego store in Downtown Disney, Orlando.  Just got back from a great trip to FL with the family. 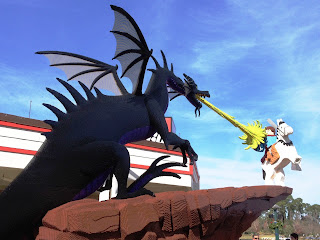 What finally made you decide to write your blog?  I was looking through running blogs after being injured at the end of my first marathon, trying to figure out what I was doing wrong, and felt like I should add to the conversation rather than just reading
If you had to listen to one song on repeat for the rest of your life, what would it be?  U2 – Bad, the live version from the ‘Wide Awake in America’ album.  Thousands of miles and hours later I still like listening to this when I run.
What's one item on your 'bucket list'?  I’ve never actually put together a formal bucket list, but completing an Ironman would be the most recent addition.  Not sure when or how, but I can see this in my future.
If you could be on any TV show, which would it be?  Mythbusters – just looks like fun.
If you could start your own race, what distance would it be? 101 miles
What would you name said race? Just Beyond Crazy
If you were forced to eat like something other than how you eat now, which would you choose?(Vegetarian, Vegan, Paleo, Pescetarian, Kosher, Cannibal, etc...)Something involving seafood.  Is there a diet that is all seafood?  I’m not very diet knowledgeable.  If not, then I’d like to subsist solely on chocolate-covered pretzels.
If you could rid the world of one social application, which would it be? I’d be inclined to say Facebook since so many people share things there that they really shouldn't share, but my wife got her job thanks to Facebook, so I have to let it slide
If you could choose just one person to train with for a training cycle who would it be? I guess I’d go with Ryan Hall, since you assume you’d get better by training with one of the best.  For pure entertainment, probably Jay Mohr.  I listen to his podcast on my long runs and have to stop sometimes in fits of laughter.
If you were a guest at our wedding what would you bring as a gift based on what you know about Spike and I? (Ha ha, this could get very interesting...) Since you two are probably the most supportive spectators around, I’d have to set you up with this monster (hard to go wrong with the description includes the phrases "Earthquake Maker", "Deafening", and "Thundering Power": 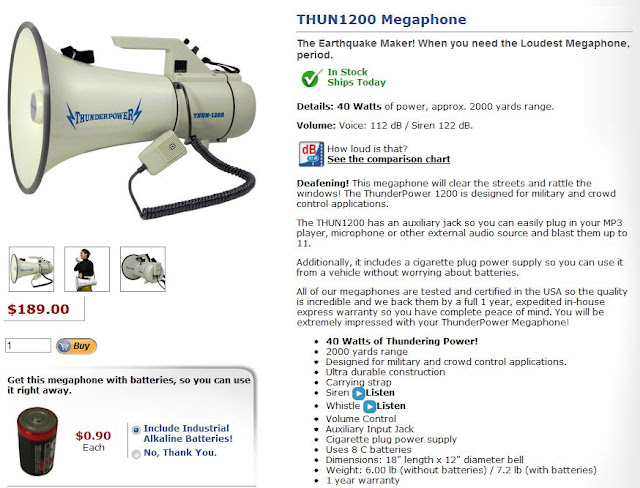 Most of the folks I would tag to pay this forward have already been tagged, or already posted on this topic, so I’ll just ask that if you haven’t done this and have survived reading through mine, you’ll do a similar post on your site.  Let me know and I’ll update this post with a link to your list.
Posted by Evolving Through Running at 8:34 AM 10 comments:

So Much for No Plans

2012 started with no races on the books other than a half-marathon in DC in March that admittedly is more an excuse to get back to DC for some quality drinking time with one of my best friends.  I’ve been happily bouncing between running, cycling, swimming, and lifting, with no real targets other than maintaining some base fitness and not getting hurt.  Possibly/hopefully even lose a few pounds along the way.  With a few innocent mouse clicks, that all changed quickly.
I’m now part of a 12-man relay team that will be running the Palmetto 200 in April in (hopefully fairly warm) South Carolina.  Signing up for this got me thinking about getting a little more serious with the running part of my fitness routine, since I don’t want to let my team down and be the “slow guy”.  Still, this relay didn’t put me into full training-plan mode.  Then I talked to a running friend at work, and found myself signing up for the OBX 50k on May 5.  First-ever staging of the event.  Only 35 runners.  Suddenly things have gotten much more serious.
This will be my first foray into the great unknown beyond 26.2 miles.  One might think that when making the move out to 30 miles you might want to keep things fairly simple.  Well … I did keep things flat, but the interesting thing about this run is its 1.6 miles on the road, followed by 29.4 miles on the beach.  Subsequent research has indicated that 30 minutes of running on sand feels like about an hour of running on pavement.  Perhaps I should have done some of that research before I signed up. 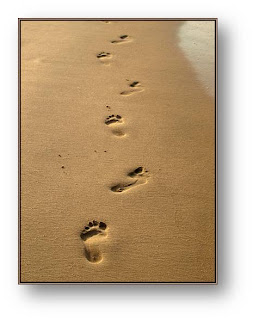 I’ve now shifted my mentality back to that of a runner, and am working on a training plan focused primarily on running, with cycling, swimming, etc. still included but truly used as cross-training alternatives rather than equal-time pursuits.  Not really sure how to simulate the running on sand part of the training.  Time to find some good trails nearby with loose soil.  I’m envisioning the whole new kind of sore I’ll be facing after finishing this one, and I’m glad I’ve got a jumbo-sized dispenser of Biofreeze already purchased.
Game on.
Posted by Evolving Through Running at 4:49 AM 6 comments:

Evolving Through Running
My name is Chris, and my legs hate me. Or perhaps I hate my legs. Regardless, I am a runner. Oft-injured, but a runner nonetheless. 2010 was the year I started running marathons, and got to know my orthopedist far too well. Six marathons, a 50k, a 50-miler, a half-Ironman, and a full-Ironman later I'm still learning about life and endurance. Some of the lessons have been very hard, but I'm still ticking. Miles to go before I sleep ...